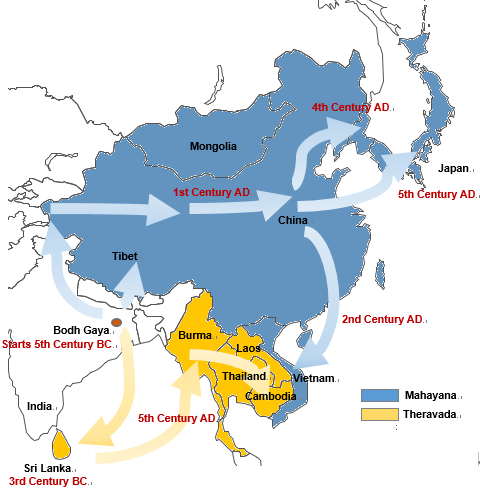 Mahāyāna (Sanskrit: महायान; literally the “Great Vehicle”) is one of two (or three, under some classifications) main existing branches of Buddhism and a term for classification of Buddhist philosophies and practice. The Buddhist tradition of Vajrayāna is sometimes classified as a part of Mahayana Buddhism, but some scholars may consider it as a different branch altogether.

According to the teachings of Mahāyāna traditions, “Mahāyāna” also refers to the path of the Bodhisattva seeking complete enlightenment for the benefit of all sentient beings, also called “Bodhisattvayāna”, or the “Bodhisattva Vehicle.”A bodhisattva who has accomplished this goal is called a samyaksambuddha, or “fully enlightened Buddha.” A samyaksambuddha can establish the Dharma and lead disciples to enlightenment.

The Mahāyāna tradition is the largest major tradition of Buddhism existing today, with 53.2% of practitioners, compared to 35.8% for Theravāda and 5.7% for Vajrayāna in 2010. 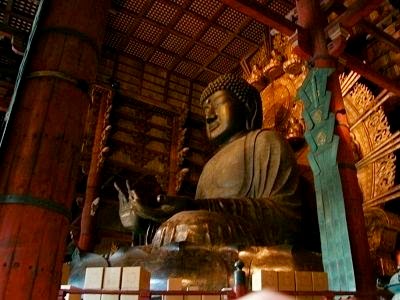 Buddhism has been practiced in Japan since at least 552 AD, though some Chinese sources place the first spreading of the religion earlier during the Kofun period (250 to 538). Buddhism has had a major influence on the development of Japanese society and remains an influential aspect of the culture to this day.

About 85 million people in Japan, accounting for two thirds of the population, are affiliated with Buddhism in some way, often nominally – in various surveys, 70–85% of Japanese profess no religious membership or personal religion. Most Japanese Buddhists are also similarly affiliated with Shinto, as neither of the two religions demand exclusivity.

Zen is a school of Mahāyāna Buddhism that developed in China during the Tang dynasty as Chán. From China, Zen spread south to Vietnam, northeast to Korea and east to Japan.

Zen emphasizes rigorous meditation-practice, insight into Buddha-nature, and the personal expression of this insight in daily life, especially for the benefit of others. As such, it deemphasizes mere knowledge of sūtras and doctrine and favors direct understanding through zazen and interaction with an accomplished teacher.

The Late Nara period [710-794 AD] saw the introduction of Esoteric Buddhism to Japan from China, by Kūkai and Saichō, who founded the Buddhist schools named Shingon-shū and Tendai-shū respectively. The general term for Esoteric Buddhism in Japan is mikkyō (密教; literally “secret teachings”). In order to differentiate between the esoteric practices from the two schools, Shingon-shū practices are also known as Tōmitsu (東密) while Tendai-shū esoteric practices are known as Taimitsu (台密). (Source & More Information: Wikipedia: Esotericism, Wikipedia: Shingon Buddhism, Wikipedia: Tendai)

Japanese Buddhist branches are described as “十三宗五十六派 (jūsanshū gojūroppa),” which refers to thirteen Buddhist schools and fifty-six sects. In addition, several new religions have been established after WWII, such as Soka-gakkai, which developed from the Nichiren-shū schools. Following is an introduction to the eight major traditional schools in Japan.